The CAGED Study is part of the project EQUIP – Strengthening smallholder livestock systems for the future, funded by the Bill & Melinda Gates Foundation.

Read more about this video and presentation.

Why we need the CAGED Study

Children who lack nutritious food are likely to face many illnesses and even death. Globally, undernutrition is a major factor in the death toll of children under the age of five. The children who survive may face cognitive and emotional problems. One means of reducing such undernutrition is to increase a child’s consumption of animal-source foods; moreover, these foods are crucial for the nutritional health and livelihoods of 600 million small-scale farming families living in poverty. But does the problem stem from poor nutrition only, or are other processes involved as well?

Every parent knows that children habitually put contaminated objects in their mouths. When those children live in close contact with livestock, such as goats and chickens, they have added risks of contamination from bacteria hosted in the animals. Emerging evidence indicates that a high prevalence of bacteria—specifically from curved bacteria called Campylobacter—infects children in these settings, which leads to impaired gut health, nutrition and growth. This impairment may undermine the potential benefits of animal-source foods. Unfortunately, little is known about the reservoirs and transmission pathways of these bacteria in rural communities in low- and middle- income countries, such as Ethiopia.

Prior to a longitudinal study, a formative, cross-sectional study was conducted in rural eastern Ethiopia to assess the prevalence of stunting, environmental enteric dysfunction (EED), and Campylobacter colonization in young children, as well as to characterize the socio-demographic background. Among the 102 sampled children aged 12 to 16 months, half were colonized by Campylobacter when tested by polymerase chain reaction, and EED biomarkers were elevated in half of them. In most children, the infections were asymptomatic (not accompanied by diarrhea and/or fever). The prevalence of stunting was 41%, higher than the Ethiopian national average. Breastfeeding was common, and more than half of the children consumed some animal source foods (mainly milk), but diversity of complementary foods was low. Water, sanitation, hygiene, and management of animal droppings were poor. Metagenomic analyses revealed a high diversity of Campylobacter species in the children’s gastrointestinal tracts. Besides the well-known species Campylobacter jejuni and C. coli, other non-thermophilic Campylobacter species related to C. fetus and C. hyointestinalis were observed frequently and in high abundance. Very little is known about the reservoirs and transmission pathways of these species. Based on limited knowledge from high-income countries, we hypothesize that livestock, including chickens and ruminants, are important reservoirs.

Our initial hypothesis, that chickens were the main reservoirs of Campylobacter colonization of young children, was not fully confirmed by the formative research findings. Ruminants may also be an important reservoir, and even human-human transmission cannot be excluded. We will conduct a prospective longitudinal study to assess the fecal-oral transmission network of Campylobacter bacteria in our study area and to quantify the role of livestock in this transmission.

The longitudinal study will be undertaken to address the following objectives:

The longitudinal study will involve 120 children followed from birth to 18 months of age in 12 kebeles in rural eastern Ethiopia. A range of microbiological methods will be used to characterize the genetic structure of Campylobacter population in human and livestock reservoirs. Interactions between Campylobacter colonization and overall gut microflora in the children against a background of the socio-demographic environment will also be evaluated.

Given the unique opportunity of working with a well-characterized cohort of young children from the CAGED project, the EXposure Assessment of CAMpylobacter Infection in Rural Ethiopia (EXCAM) project was additionally funded by the Bill & Melinda Gates Foundation. EXCAM aims to develop and apply methodology to unravel pathways of children’s exposure to Campylobacter spp. 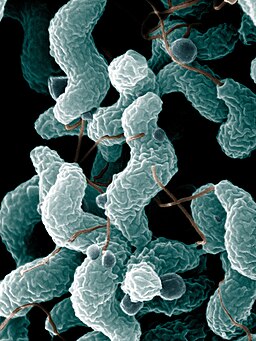